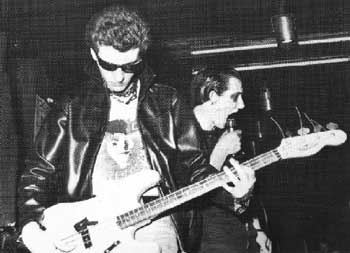 Hello Captain ! In the course of the last 20 years, THE DAMNED had declared several times that they were on the point of splitting up for good, and that they were doing their last shows : remember the “Final Damnation” era, for instance... But despite that, finally, the band always kept on
existing until now, and never really stopped ! Is this a voluntary “strategy” ?... And what is the reason that pushed you to continue, after all these years ?...

Well, it’s the only thing I can do : play guitar. I used to be a toilet cleaner before THE DAMNED, and I don’t wanna go back to that. We are actually pretty good at what we do too. Loadsa noise power and great songs too... I love it !

What have THE DAMNED become since their latest album “Not of this Earth” ? ...

That is not a DAMNED album... The material was written by an impostor.

Really ?... Please tell us more about that !

It has been ENTIRELY written by a guy named Alan Lee Shaw. As far as I know, he's not a REAL member of the DAMNED ! Brian James...yes. Algy Ward...yes. Dave Vanian...yes. But Alan Lee Shaw...I don't think so !

How did all the band’s members meet themselves, back in ‘76 ? What was your state of mind & motivation when you decided to form the band ?

I worked with Rat... (as toilet cleaner : he cleaned floors). We both had our own bands, but they were going nowhere, as was music in general in the mid 70s. There had to be something more exciting... Then he answered an ad in the Melody Maker, and met Brian who had the masterplan...

I was working too hard on my own stuff... My manager was a slavedriver and hated THE DAMNED. I wanted to do both, but he made it difficult. Rat was very jealous of my success and was pretty unpleasant to me, so I quit.

...How and why did you finally decide to come back, and to re-integrate the original line-up ?
The phone rang and a tour was suggested... I said yes - well, I was skint, wasn’t I ?... The tour was great and I really enjoyed that shit kicking noise that was coming out of the guitar. I’ve just got a big new amplifier, so watch out, World !...

What’s your opinion about “Phantasmagoria” and “Anything” albums, recorded by THE DAMNED while you weren’t in the band anymore ? Do you also enjoy this other side of the band and that so different musical way ?...

I like most of “Phantasmagoria”, though it’s a different direction to what we’d done previously. A good record...Unlike “Anything”, which sounds like it was written in the studio while they were having regular fights...Which of course is what WAS happening !!...

THE DAMNED have released more than 8 official studio albums since 1977, + tons of live & compilation albums, singles/EPs, 12", and so on... Which are your favourite ones, and why ?... And which are your favorite tracks ever ?...

The 1st album and “Machine Gun Etiquette” are my faves, ‘cos they kick ass and have great songs. I got fuzz organ on “I just can’t be happy today”, so I’m fond of that one. I also like “13th Floor Vendetta”, on which we cut out about 15 metres of 24 track tape and spliced it in backwards...And it worked !

Can you please let us know more about your musical tastes and inspiration ?...

There’s good and bad examples of all forms of music... Frank Zappa said that 98% of classical music was bullshit, and the other 2% was genius. Do you think he counted his own symphony as on of the 2% ?... Ha ha !! But unfortunately, the most popular stuff is the rubbish... Phil Collins, Take That, etc... So I dig in and find the more interesting weirder bands, like the sickeningly poppy US family band THE COWSILLS, or the UK band THE GROUNDHOGS, whose “Thank Christ for the Bomb” album is a masterpiece. JIMI HENDRIX is THE inspiration as a guitarist, ‘cos he took risks and never repeated himself. That’s the proof there’s no god : Hendrix died, instead of Clapton !...

Since the beginning until today, who are the bands you had good and friendly contacts with ?

THE STRANGLERS, BUZZCOCKS, PETER AND THE TEST TUBE BABIES, CHARLIE HARPER (UK SUBS), ROBYN HITCHCOCK... All worth a beer with !

What’s your opinion about all those old punk bands currently re-forming, and playing in big festivals such as the famous “Holidays in the Sun” in Blackpool, for instance ?... Do THE DAMNED play at such festivals ? If so, what’s your viewpoint about the audience & general atmosphere ?...

Bloody good fun. Ya meet all your old mates, and get pissed...as you would expect ! There’s one in Morecambe this year that we are on... Burp !

And what’s your opinion about the new generation of punk bands, in the UK and from the rest of the world ? Do you enjoy some of them ?

Yes... Some of ‘em, but I prefer Rachmaninov’s 2nd piano concerto. It’s just so sad and melancholy !

According to you, how can we define the primordial essence of Punk spirit ? From the beginning until now, what have you been seduced by, in this cultural movement ?

Punk is a lot more than the bands - who cares about them ?... Punk is a way of life. No suits, no vicars, no sitting in front of TV all night, no racism, no expensive cars and smoking cigars and stuff. I will never be the same again.

Do you have things to express about the current state of this world ? Do you care about social or political issues and problems ?...

I’m a socialist basically, and I hate the american corporate capitalism as pervaded by McDonalds, Coca Cola, and Mickey Mouse (pure evil !). The West hates dictators when they’re against them -Saddam, for instance-, but loves them when they’re anti-left, like Pinochet and many others. All the companies want to sell cars and cigarettes to China and Third World countries...It’s lunacy. And then, there’s the church !!!

What are your main hobbies, out of the band ?...

In the USA, there’s a kind of almost official DAMNED fan-club called “NEAT DAMNED NOISE” (NDN), doing a regular fanzine entirely dedicated to THE DAMNED, producing some DAMNED tribute recordings, etc... Are those guys friends of yours ? And what do you think about such activities ?
Henrik’s a good bloke. He looks a bit like Schwarzenegger in “Terminator”, and lives in Houston, Texas, but you can’t have everything, can you ?... He supports THE DAMNED when we have not many friends in the media, and we won’t forget him for that.

Can we hope for a new DAMNED album to see the light soon ?...

We ARE writing new material which is very strong, and will make a great album !

Thanks for your replies, Captain. A last word, maybe ?...