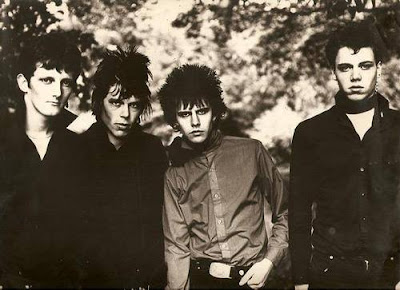 Who remembers the SCREAMING DEAD ?...
Totally atypical, this legendary Horror Punk Rock band with an energic sound and with a macabre imagery managed to surround the british scene from the early 80's with its dreadful shadow , leaving indelebile memories in many people's mind.

A few years ago, by popular demand, they suddenly resurrected a truly unexpected way, but sadly, the experience of this obscure and ephemeral reformation seems to be over, nowadays...
In late february 1999, a few days prior to his departure on a final tour, Tony McKormack, founder member of the band, did with me the exceptional interview reproduced below. Recently reformed once again, the SCREAMING DEAD finally continue to exist under the new name of VAMPIRE DIVISION, and they're currently recording their debut album, which is planned to be issued in 2004. 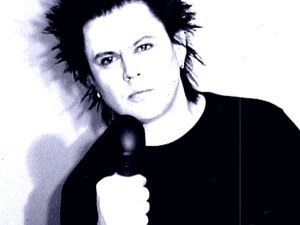 Hello ! Can you please introduce yourself, and please can you remind our readers of the history of the SCREAMING DEAD, from the band's birth until today ?...

I am Tony McKormack, the guitarist and song writer for the SCREAMING DEAD. Mal Page is the Bassist, and Sam is the Singer. We formed in 1980 with the idea of being a Horror Punk band (there were on Goth bands in those days). We released five singles between 1982 and 1985, and split up in 1986. I went on to form INKUBUS SUKKUBUS , Sam and Mal stopped playing music. In early 1997 we reformed to do a few gigs in the UK for old times sake. These were far more successful than I had anticipated, so we did further tour at the end of the year . We are about to do a tour of Germany with Inkubus Sukkubus in March. 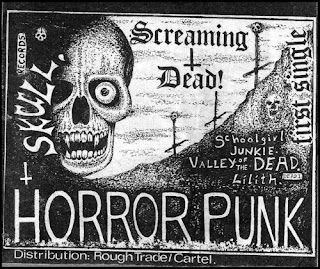 The SCREAMING DEAD are often assimilated with the particular "dark punk"/"post-punk" wave from the early 80's, which also featured other legendary bands like UK DECAY, PLAY DEAD, THE WALL, THE DARK, THEATRE OF HATE, SKELETAL FAMILY and lots of others... Did you have any contacts with some members of those bands, and did you enjoy these bands?... And currently, are there still some punk bands who perpetuate this so particular "darkened" style, in the UK today ?...


I believe there are a few, BRIGANDAGE are still going, but unfortunately most of them faded away by the mid 80's. THEATRE OF HATE have reformed and are giging again.


Most of the issues that the SCREAMING DEAD deal with in their lyrics are quite unusual for a punk band, and you seemed to be mainly inspired by subjects such as death, horror, nocturnal terrors, occultism, sorcery, demonology, vampirism, and so on... What's the origin of this particular interest? What were your inspirational sources? And what did you try to express through such images ?

I have always been interested in dark morbid things. When I formed the SCREAMING DEAD, I wanted to have a band that was very different from the other Punk bands of the time. So I wrote songs about things that I was interested in. 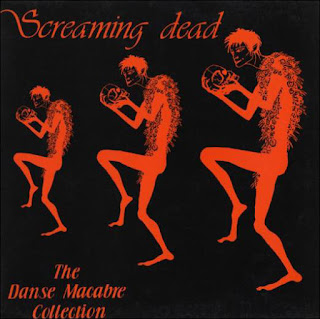 Amongst the numerous issues of this kind that you seem to be fond of, the figurehead of Lilith, amongst others, seems to occupy a preponderant place in your mind . What does this entity symbolize to you, exactly ?...

The dark side of female sexuality .

You seem to feel very strong affinities towards Paganism in general, and towards Wicca and druidry in particular. Can you please let us know more about the nature + content of these pagan beliefs ?

Most european Pagan beliefs are based on the once great religion of Europe and most of Asia that started in Neanderthal times and lasted until the first few centuries of Christianity. They are all essentially based on Nature, magic and fertility. They are all different but have a common theme running through them. They generally have a God (usually the Horned God) and a Goddess. The Celebrations generally speaking follow the agricultural calendar.

You also seem to feel a very strong hostility towards Christianity and monotheist religions in general. Please, explain what are the deep reasons of such an hostility....

History has proved that Christianity and the other Judeo-Christian religions are essentially hostile to each other and also to all other religions. This hostility usually manifests itself in persecutions and wide-spread murder and torture. As a rule Pagans tend to respect other religions, providing that the respect is returned. I do feel that any religion has a great potential for harm if ever given enough power. 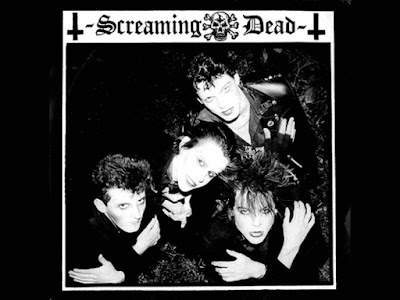 Sadly, mainy punks still ignore the differences between such "revelated" intolerant religions and pagan spiritualities/philosophies. Can you please let us know more about those differences?...

I think that intolerant religions are the the ones that promise salvation through adherence to their particular faith, and also have a great deal of political power. Judeo-Christian religions are all based on salvation, reward, punishment, Heaven, Hell, God and Evil. They basically are controlling religions that are against free-will. Paganism is about self development and freedom.


In fact, this interest in Paganism is also quite unusual for a band coming from the punk movement. Do you think your approach is well understood and accepted by the audience ?

I believe that as a rule most people who come to see the SCREAMING DEAD come for the music. There are a few who understand what the songs are about, but generally speaking most people don't.


Do all the other SCREAMING DEAD members also share your pagan beliefs, or are you the only one(s) who got involved in this spiritual way ?

I am the only member of the SCREAMING DEAD who has any interest in Paganism. 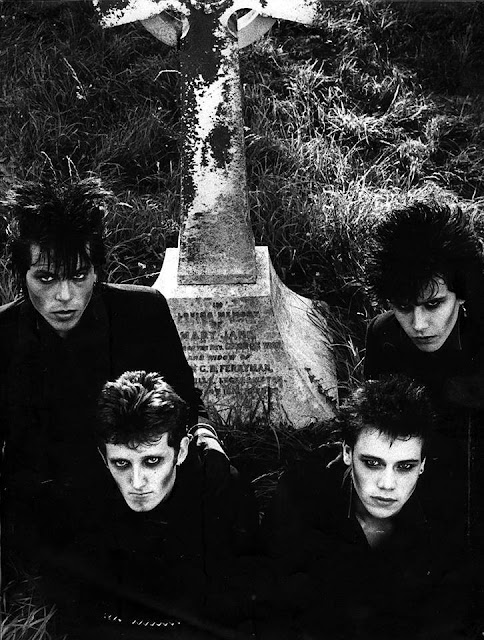 For quite a long time, you also play in another band called INKUBUS SUKKUBUS, which is more Pagan/Gothic Rock oriented. When, why, and how did you give birth to this new project ?

I formed INKUBUS SUKKUBUS about 2 years after the SCREAMING DEAD split up, I had formed a previous band (The Resurrection) but this band also split up. I wanted to form a band that was very different from The SCREAMING DEAD, as I didn't enjoy the last few years that the band was going. I also had more experience and access to better equipment than I did when I was in The SCREAMING DEAD. I meet the other members a Art College and we began by using a drum machine.


So, can we consider INKUBUS SUKKUBUS as the direct continuation of what you started with the SCREAMING DEAD ? 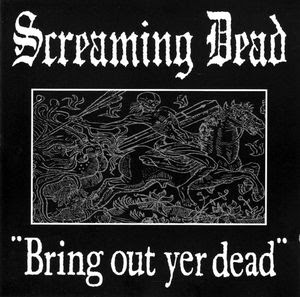 Those times, there are some rumors circulating, about hypothetical last SCREAMING DEAD concerts ever who might be planned for year 1999. Is it true?... Is it the real end of the band, and is it true that there will be absolutely no chance for a future reunion after that? And if so, what's the reason of this definitive split ?

Yes, the last few dates will be played in March 1999, supporting INKUBUS SUKKUBUS in Germany, there will be no more gigs after that. There are lot of reasons for this. Firstly, Mal doesn't want to play any more, also I have been neglecting INKUBUS SUKKUBUS , but possibly the main reason is that we have been unable get a recording contract. I have come to realise that The SCREAMING DEAD belong in the past.

Will the SCREAMING DEAD line-up also feature Candia for these final concerts, or will this line-up feature original band's members only ?

It will just be the original members. 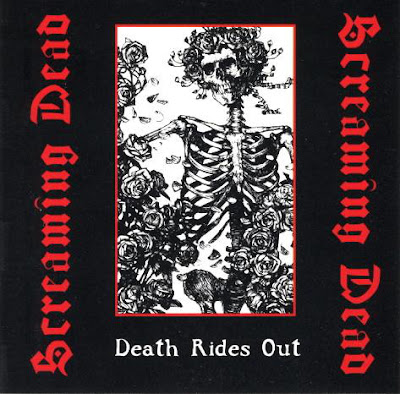 Please, let us know more about "PAGAN FIRE MUZICK". What are this structure's activities, and does it have something to do with your label, "RESURRECTION RECORDS" ?

When we first started INKUBUS SUKKUBUS, we didn't have a recording contract, so we just sold tapes through the post and at gigs. We opened a bank account and called it Pagan Fire Muzick so that people ordering tapes would thing that we had a deal. As time went on the company grew, and it is now the company that sells all of our merchandise at gigs and also through the post. Resurrection records is our record company and is not linked to Pagan Fire Muzick. However Pagan Fire Muzick buys stock from Resurrection to sell.


You know, all the SCREAMING DEAD records have become quite hard to find, nowadays.. Do you plan any CD and/or vinyl re-releases for the near future?... Don't you think it could be a good idea, especially for the people who didn't know the band before ?

We can't do any vinyl releases because it cost to much, but we do have a CD out with all of the Screaming Dead material on called 'Bring Out Yer Dead' If anyone is interested they can order it from Pagan Fire Muzick, we will be bringing some over when we tour Germany. 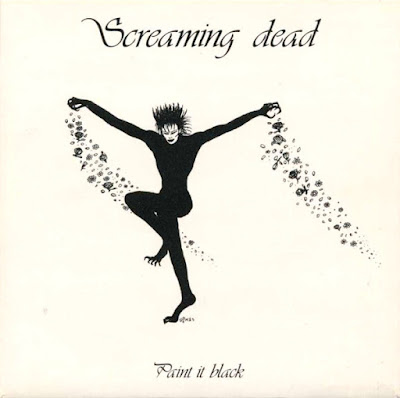 I would just like to thank everyone who remembers the SCREAMING DEAD, and therefore made it all worth it. 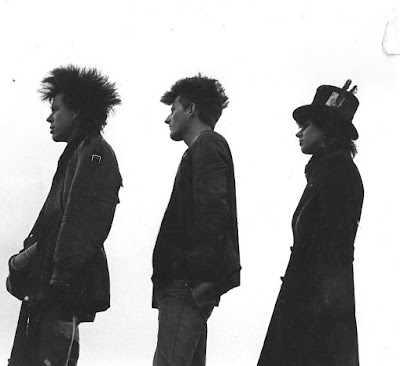 * "Death Rides Out" - Resurrection Records - 1999
(Re-recordings of old songs in a new style and new tracks:
Bubonia - Methadonia - Free with the Dead - Jerusalem)